Hydrates are ionic compounds (salts) that have a definite amount of water (water of hydration) as part of their structure. The water is chemically combined with the salt in a definite ratio. Ratios vary in different hydrates but are specific for any given hydrate.
The formula of a hydrate is represented in a special manner. The hydrate of copper sulfate in this experiment is listed below:

In the formula, the unit formula for the salt appears first, and the water formula is last. The raised dot means that the water is loosely bonded to the salt. The coefficient x stands for the number of molecules of water bonded to one unit of salt. This special formula, like all other formulas, illustrates the law of definite composition.
When hydrates are heated, the "water of hydration" is released as vapor. The remaining solid is known as the anhydrous salt. The general reaction for heating a hydrate is:

Some anhydrous salts can absorb moisture from the air to become hydrated. A common example is silica gel, made from sodium silicate which is usually packaged with optical or electronic devices shipped by boat. The silica gel protects the devices from high humidity.

In this experiment, as was mentioned, a hydrate of copper sulfate (blue) will be studied. The change from hydrate to anhydrous salt is accompanied by a change in color:

This investigation should aid you in your understanding of the formulas and composition of hydrates and the law of definite composition.

To determine the percentage of water in a hydrate. 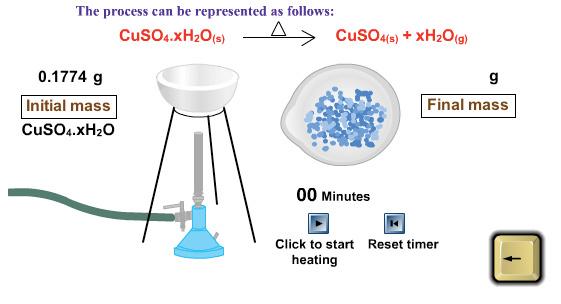 4.  Determine the number of moles of the anhydrous Salt: ____________
(Hint:  First determine GFM then use mole calculation in Table T of reference table)

5.  Using the reaction below determine the number of water molecules per mole of copper (II) sulfate hydrate:
CuSO4  . xH2O  Determine "x", where x is a whole number.
Hint:  step 1-  Use the number of moles of water and copper sulfate calculated above
step 2-  Divide by the smallest mole number
step 3-  Round to the nearest whole number

****Special Thanks to the chemical education research group at Iowa State University for the amazing animation that you just used.