Some properties may be used to predict the type of bonding in a substance.  These properties are phase at room temperature, melting point, solubility in water and electrical conductivity.  Atoms can bond by either the transfer of electrons or the sharing of electrons. Atoms which transfer electrons form ionic bonds while those which share electrons form covalent bonds.
A conductivity apparatus will be used in this experiment to determine if a substance conducts electricity.  When the electrodes of the conductivity appartus are placed into a substance that conducts electricity the bulb will light up.  This occurs because electricity travels from one electrode through the substance to the second electrode completing the circuit and lighting the bulb.  If the substance does not conduct electricity then the circuit is not completed and the bulb will not light up.

Several physical properties of different compounds will be demonstrated.   By comparing the patterns that develop, students will determine which properties are related to the particular type bonding.

Properties of Covalent Compounds
1. Gases, liquids, or solids (made of molecules)
2. Low melting and boiling points
3. Poor electrical conductors in all phases
4. Many soluble in nonpolar liquids but not in water

2.  You will use the data collected and your knowledge of Chemistry to determine the type bonding found in each substance.  Hint: Review the properties of ionic and covalent compounds listed above. 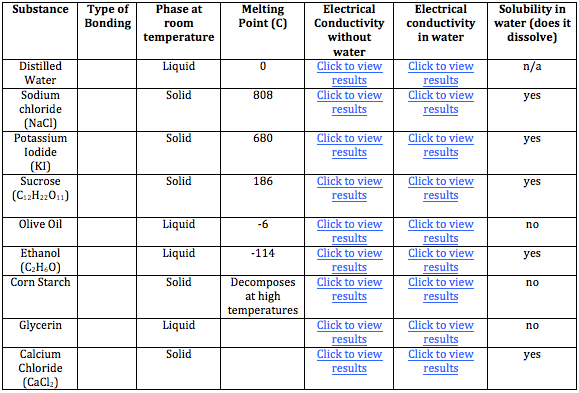 3.  Sodium chloride is an ionic compound while corn starch is a covalent.  Go back to your chart and determine which other compounds are ionic compounds.  What characteristics do these ionic compounds   have in common that caused you to choose them? (Hint:  Refer to the properties of ionic and covalent compounds in the prelab)

1.  What phase were all your ionic compounds in?  Why?

3.  When are ionic compounds able to conduct electricity? Why?

4.  If water doesn’t conduct electricity, why would you get electrocuted if you drop your hair dryer in the bathtub when you’re in it?

6.  Write out the Lewis dot diagrams for the ionic compounds in the table above.